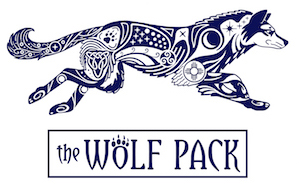 Welcome to the Wolf Pack Howl!

Participating Wolf Pack Authors are sponsoring 3 days of giveaways on their Facebook pages. Each author is offering their own prizes (listed below).

‘My Book Boyfriend is an Animal’ prize pack

Wolf Pack tote with surprises inside

$10 Amazon Gift Card
Join The Wolf Pack Facebook group!
It’s the place to be for readers who like a good howl: 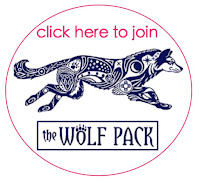 This novella will first release as part of the Romancing the Paranormal anthology.

This novella will first release as part of the Romancing the Paranormal anthology.

In the middle of a war with dragon shifters, a human widow of a werewolf may get another chance at love, but feelings of guilt threaten a blossoming attraction to the one wolf everyone thought was untamable.

Lessie smiled at the excitement in Elise’s voice. She turned her face toward where Elise was pointing while jumping up and down.

She laughed at her friend, “Have a little dignity.”

“Pffft,” said Elise. “Who needs dignity? I need a man. Or maybe a werewolf man,” she pretended to swoon.

The day was bright, filled with the musical sounds of wind chimes ringing in the breeze, like fanfare announcing the arrival of the young wolves looking for brides. Lessie tried but failed to calm the surge of nerves. Elise was the catalyst that pushed her control over the edge. Her emotions had broken free and were not taking either advice or direction, as was clear by the goose bumps that had risen all over her body. Even the air felt like it was filled with magic.

Their society had been burdened with a generation of young women of marriageable age, and no male counterparts to marry. Likewise, so they’d been told, there was a world with a population of young eligible werewolf males without females to wed and, supposedly, they were even more eager to meet. The Conscriptor had stressed the word “eager” in a way that made some of the girls giggle and exchange bright-eyed looks of delight. Others were more outwardly reserved, even if they were just as titillated by the suggestive inference.

As recently as a fortnight before, the young ladies had never heard of werewolves. The description of their species was a little horrifying at first, but desperation overrode choosiness and they decided they were willing to take a look. By the time the day of arrival came, all reservations had melted into a breathless anticipation.

Lessie had worn a yellow dress that complimented her auburn hair and light brown eyes. Set against the bright sunshine of the morning, the color almost made her appear to glow, as if she was walking surrounded by a halo.

The wolves were arriving on the docks by an ocean that was sparkling with reflected sunlight. The means of their arrival was nothing less than dazzling to humans who were accustomed to ordinary, mundane lives.

From the hillside Lessie and her friends could see the prospective husbands come into view one at a time, as if they were walking out of nothingness and taking form as they emerged. It seemed to the girls that it was a god-like thing to do, appearing out of nowhere. That, of course, added to their mystique and made the occasion even more thrilling. The prospects were arriving quickly enough to become a group and be scoping out their surroundings by the time the bachelorettes reached the dock en masse.

The werewolves had been told they would have their work cut out for them if they wanted to convince a human female to commit to mate and leave her home forever. With that in mind, they had studied what behaviors women find attractive in men, along with actual classes in the arts of love taught by a sex demon who was a friend of their alpha. They had come to the land of brides prepared for pursuit of a mate to be the challenge of their lives. So the last thing they expected was to be, more or less, besieged by a crowd of beauties in bright colored dresses and brigher smiles that conveyed receptiveness to social advances.

Lessie’s friends had rushed into the crowd of wolves with an enthusiasm that she found embarrassing. She’d hung back at the edge of the throng, feeling and, perhaps, looking uncertain.

While she was trying to decide whether she would continue to observe or join the mixer, the air dazzled a few feet away and she was face to face with a male who simply and literally took her breath away. He was a little taller than she, with golden skin and long mahogany-colored hair worn loose down his back. But the single feature that caught her attention so that she couldn’t have looked away, not even if she was on fire, was his eyes. His irises were a gray so pale they made him seem even more alien than she’d been expecting. But the otherworldly look of his eyes was softened and warmed when the edges of his mouth turned up into a wolf smile.

As it happened, he seemed to be just as captivated by her and never took his eyes away.  Relations with the opposite sex is both easy and natural for werewolves as they are sexual creatures with an innate charismatic appeal, particularly where humans are concerned. One look at the face of the prey who had wandered into his path told the wolf that his pursuit would be both fruitful.

“What’s your name?” asked the wolf.

“Lestriv.” He repeated her name slowly as if he was tasting it and rolling it around on his tongue. “That’s hard to say.” His conclusion was offered with a teasing smile that made his eyes light from within.

She resisted the impulse to reach out and trace the strong pronounced line of his jaw with her fingertips, but just barely. Instead she returned his smile, feeling shy about her inexperience with the opposite sex and, at the same time, emboldened by his obvious interest.

“I guess that’s why most people call me Lessie.”

He tried out “Lessie” the same way and, looking satisfied, said, “Much better.”

The werewolf took a step toward her. She took a step back reflexively, not because she wanted to retreat from him. She didn’t. It was simply an involuntary response.

She couldn’t have known it, but it was the best thing she could have done if she wanted to snag a wolf because that small response awakened his predatory instincts and made her an object of even greater fascination.

“I’ll not harm you. In fact,” his mouth curled in a way that made her knees weak, “I’ll show you more pleasure than you’ve ever imagined. If you’ll let me.”

At that he reached out at arm’s length and ran a warm finger down her cheek. She couldn’t suppress a shiver. He couldn’t stop his smile from widening when he saw it.

Inside she may have been contemplating the many ways she would like to explore his claim of commanding pleasure, but what her mouth said was, “What’s your name?”

He raised his chin and offered a charming little lopsided grin. “Jimmy Clear-Eyes.”

Lessie cocked her head to the side. “That suits you fine, werewolf.”

Again he took a step toward the woman and reached for her hand, but that time she did not back away.

The sound of wind chimes blown by sweet sunny breezes stopped abruptly as Lessie started to feel the corporeal weight of her body waking. She heard a woman’s voice repeat, “They’re here,” but it wasn’t Elise announcing the arrival of young brash handsome werewolves looking for love. It was the alpha’s mate, Luna, come to help get her ready for the worst day of her life, Jimmy’s funeral.

Inside her mind chanted, “No,” over and over again, like she could use the word as a shield against reentering the nightmare of her reality But she couldn’t hold wakefulness at bay forever. New tears sprang into eyes badly swollen from crying for two days.

As she turned in the bed, her hand automatically went to her belly, which was just beginning to tell the world that their second child was seeded and growing. She hoped that the baby, he or she, couldn’t feel the pain in her heart.